I HATE bicyclists in London

I am aware that I may sound like a grumpy old woman (which I probably am) but I have been meaning to rant about the  subject of bicycles in London for ages. I am  aware that what I am going to say is probably quite contentious, particularly as Boris has been banging on about needing more bicycles  in London for a long time now. But in my opinion bicycles and cars don't mix in the urban jungle. I very nearly knocked down a man on a bike who was absolutely oblivious to the outside world recently. Not only did he have a small child on his handlebars who was not wearing a helmet, but he was also wearing head phones, and didn't even notice that I nearly collided with him. Combination (Earphones/child on handlebars =  Disaster. What an idiot.  And this is not the first time I have seen father's (yes it's usually father who ride with their small children on the handlebars)  and not the first time I have witnessed people on bicycles without helmets or wearing headphones. I was nearly swerved into a lout who was attempting to ride a bike while holding two beer cans, one in each hand and when I screeched to a halt to avoid knocking him over, he stuck his finger up and swore at me.

Bicycle riders can't see what is going on behind them, so they need their ears and yet they listen to music. MAD. They also swerve into lanes without looking, go through red lights, meander this way and that. I HATE THEM. Why aren't there more arrests for dangerous bicycle riding?

Of course there are skilful and careful bikers out there too, but it's the dangerous, careless, ones that get noticed. I don't think we need bicycles in London, and if we do, we should one car-free day a week, in which bicyclists can use their bikes, but that's it.

I have to come clean and admit that about ten or fifteen years ago, I actually did knock a man off his bike. I was turning left in a car, and just didn't look as he biked up my inside. He was OK, thank God, but it could have been worse. It was obviously my fault for not looking properly, but people on bikes,should take more CARE and be more AWARE, and not act as though they are KINGS of the road. I have heard countless other stories of people opening car doors and knocking people off bikes.

Let me explain that I did once take a bicycling safety course and after completing the course, concluded that I still didn't feel safe enough to venture out of my own hood, into dense traffic. Perhaps all cyclists should be made to take a test. Not joking by the way. I am serious.

The picture below is of me and the two children a couple of years ago, biking along the canal from W12 to Camden. No danger of cars completely safe and fun. Sorry to sound smug. 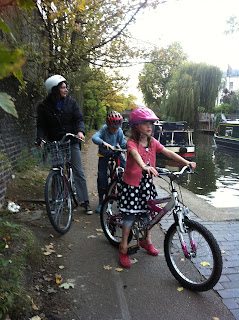