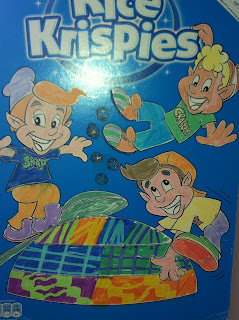 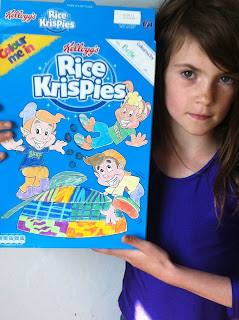 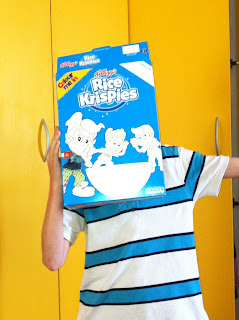 I am  a fanatic witch when it comes to children's cereals: All that sugar and salt! There is nothing fun and smothered in chocolate for breakfast at our house although when my daughter came back from a weekend away recently she asked for chocolate spread for a few days. During the long cold winter we quite often have porridge, with a concession to it being smothered in honey, and we have the fun sort of cereals for the weekend. The children call the sugar cereals, Weekend Breakfast. Most days my daughter will have Rice Krispies with various yoghurts dunked on top. This is a photograph of her holding her Rice Krispie packet that came through the post in a huge box with a gigantic packet of colours. She's coloured it for a Rice Krispie colouring in competition sponsored by Kelloggs and Britmums. I absolutely love they way she has coloured her bowl, and have already told her she can have a huge sum of money if she wins the competition. My son, who considers himself too old (at 11) to colour in a cereal box, couldn't resist doing one figure -he says he'll do more, but refused to be photographed, so here he is behind a box! Check out the patterned trousers! They're great.
at July 21, 2012 2 comments: