MAKE A ONE MINUTE FILM 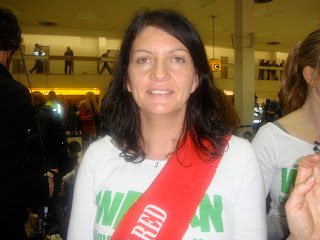 Wecan is a climate campaign group I am involved in and this is me a couple of years ago when we campaigned at Heathrow airport. The founder members were eight women, including me, who were all part of a reading group and  wanted to do something about stopping the proposed third runway. We all have children and are worried about their future on this planet. There is a one minute film competition that launched last year with the help of Wecan, and is launching again this year. Its called One Minute To Save The World.  I helped judge entries for the final short list last year, and the films were  brilliant, some simple, some weird, funny - anyone can enter, you don't have to be film maker.We had entries from children and primary schools, from amateurs and professionals.  Have a look at the website below.

Make a 1minute film on climate change and you could win £5000, laptops, Flipcams and the SONYNEXVG10 HD camcorder.  Winning films will be screened in front of world leaders at COP16 in Mexico and be part of an on-line campaign going out to millions of viewers, they will also go to International Film Festivals in 2011. 1 Minute To Save The World is an international competition, open to all ages and free to enter. Judges include award wining film director and climate activist Shekhar Kaphur, Passion Pictures, Ben Kott (Google Europe Environmental Operations) and the UK Copenhagen 4 (youth climate change activists). Competition deadline is 17th December (12th November for under 18 age group).
In partnership with Unicef, Passion Pictures, United Nations Development Program, APE (Artist Project Earth) and Sony.
http://www.1minutetosavetheworld.com
at October 11, 2010

Email ThisBlogThis!Share to TwitterShare to FacebookShare to Pinterest
Labels: One MInute to Save the World.