When I’m feeling robust, having friends over for dinner seems like such a good plan, but sometimes even the idea of giving a dinner can make me feel weak.  Who to ask? What to eat? I love finding a dish I can prepare before (hate the stress of actually cooking while guests are milling around watching.) My husband is braver; he doesn’t mind sizzling some Red Snapper as the guests are sipping their cocktails. Often, to avoid the cooking anxiety, we find a recipe that works and use it for the next twelve months. We must have presented the same dish to our favourite friends at least two or three times, but hopefully they haven’t noticed or cared.

Once the decision has been made to actually have a dinner, it is time to invite the guests. It is virtually impossible to secure an unattached available man for a single girlfriend. We have one single man friend who has been rolled out several times a year for the last few years, but no match yet. The last time I invited five girlfriends together for dinner at my house, it took at least twenty emails over four days to find a mutually good date and once found and typed into diaries,  it had to be cancelled and renegotiated, as one of the girls discovered she wouldn't even be in London on the original date.

Shopping for the dinner in my experience takes more than one excursion (inevitably something will have been forgotten: the vital herb, the sparkling water or the mustard) Or we have to go and buy something for the person who rings up a few hours before to say they can’t eat meat/wheat/gluten/pulses. One woman (a friend of my husband’s) emailed to say she had become a vegan and couldn't even eat honey. We had to remake the salad dressing.

Next we have to push all the surplus mess into the coat cupboard and dump the rest on our bed and plump up the sofa cushions. There is always somebody who arrives exactly on time, just as we are shouting at the children or the cat has thrown up a hair-ball. 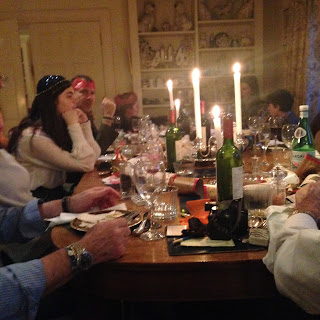 Once the guests have accepted, things can still go wrong: The couple you really wanted suddenly have to dropout. Then it’s too late to ask anyone else. Or worse, the girlfriend you really wanted to see is now ill, but she’s going to send her husband anyway.

The Men Who Only Talk About Themselves:

There are times that I’ve been invited to dinner and found myself sitting next to a man who’s more than happy to answer questions about his life, his job, and his career, but doesn’t reciprocate by finding out anything about me. This is boring, ill mannered, arrogant and socially inept. Women don’t do this or at least not in my experience. The last time this happened was at a buffet style dinner. The man in question talked about the time he was studying in France. I heard about his difficulties at work and his son’s new school. We went on chatting about his life. And on. I waited for him to enquire about mine, but that never happened. I made my excuses and slipped away.

Once we went to dinner with a girlfriend and her banker husband.  As the mint tea was being served, he yawned, looked at his watch and announced to the assembled guests that he was going to bed as he had to get up early. It was ten fifteen. He then turned to his wife and demanded that she should come too. It seemed awkward and odd to stay in the shiny kitchen without our hosts and after ten minutes we all left.

I dread the cooking bore. There are a couple of men we know who fancy themselves as a bit of a Heston or Jamie. One perfectly nice divorced man used to ask us over for 8pm.  By nine we would wonder what was happening about the food, and at nine thirty, after enquiring politely about what we were going to eat, he would start cooking. We would stand around with glasses of wine, watching him beat and marinate the steak. We would be salivating, starving and drunk by the time the food was served at ten thirty, and ready for bed.  We tried turning up half an hour later the next time, but that just meant dinner was served at eleven.

Getting Out of The House

The thing about going out to dinner mid-week is that I am usually tired before we’ve left the house. My normal ideal is to eat with the children at six o clock, have a bath at six thirty, and pajamas on by seven. So when we are invited out to dinner and it’s time to get ready, I momentarily feel exhausted. How am I going to cope with eating so late? Drinking?  Toying with chocolate pudding that I know will keep me up? And who will I be sitting next to? That man who only talks about himself? What am I going to wear? How much makeup do I have to slap on to camouflage the grey bags under my eyes? Mostly my fears are unfounded. Once I’m there it’s all fantastic and fun and we leave feeling warm and glowing and happy. It's only the morning after that the one glass of wine and the chocolate pudding and the fact that I've been unable to sleep till two, that the slump hits.

The Couple Who Leave Early

In fact hosting a dinner party is more of a risk. Things could be going really well until the couple who have a “teenage babysitter leaving at eleven,” stand up and announce that
they have to go. When the kids were young, I was guilty of saying this exact same thing. Knowing you’d be up at six meant you really had to go to bed by midnight, or life the next day would not be worth living. But the problem is that when someone leaves prematurely, the party potentially breaks up. Then you are faced with a deluge of dirty dishes and the inevitable hangover. But when you’ve cooked something delicious, the wine is just right, the friends get on, everybody has laughed,  it’s late but not too late, the pile of plates just remind you of what a good time you all had.