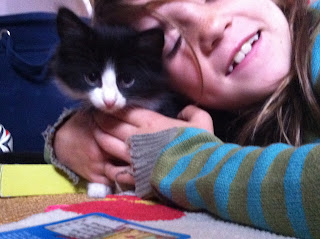 If you have a spare morning in London, I would recommend taking your mother/sister/partner/friend for a walk in the East End with East London Art Tours. I went one day last  summer, and it was really uplifting and exciting to visit a part of London, I would never normally find myself in, and also to discover was happening in the artworld, that was a little out of my usual comfort zone. Hymie our tour guide has an arts background, having worked in galleries and art consultancy and also a long stint at the British Council. Me and about fifteen other women were taken in a private mini-bus to the industrial backwater around the Olympic Park. She was a great guide, both knowledgeable and unflappable and immensely organized. We had a packed intinerary including  a visit to the Victoria Miro gallery where we saw 6 new tapestries by Grayson Perry, also a group show in Stepney Green, coffee at the most incredible building space, the White Building in Stepney Wick and much much more.


The next tour is on  October 4th. Hymie says,  Starting at Old Street tube, we'll walk through Hoxton, Shoreditch and down through Spitalfields, visiting a mix of back street exhibitions embracing film, mixed media, installation and painting in venues ranging from artist-led spaces to some very beautiful and elegant galleries.  September has a great line up of new shows in the east end, several of which are already in the art world hit list of 'must-sees'.  These include Runa Islam's short films at White Cube and a survey exhibition of the Artists Placement Group, conceptual art from the 1960 and 70s supported by Tony Benn MP at that time.

I will give a talk about the history of these three distinct and now very fashionable areas and background into the history and gossip of the art scene.  The area is great fun with lots of tucked away trendy little boutiques and cafes.  If you'd like to get to know it and feel like a stroll through the city's alternative art scene, please do join me.