A Trip to Yemen 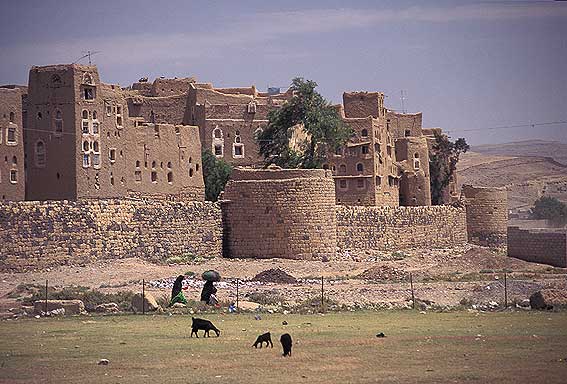 Long before I was married and became a mother, I was invited to join four writers and two photographers who were travelling to Yemen. I barely knew where Yemen was, but it sounded exotic and enticing, and I soon discovered that it lies between the Red and Arabian Seas. It was November, 1996, and as the date of departure grew closer, I learnt more, and became excited about seeing the mud tower houses in the desert, the stone dwellings in the mountains, and the conical clay huts in the Tihama.

We were lucky to travel to the Yemen when we did. The latest news from The Foreign and Commonwealth Office advise against all travel to Yemen and strongly urges British nationals to leave. They warn that there is a high threat from terrorism throughout Yemen and specific methods of attack are evolving and increasing in sophistication. Not only did we not experience any hostility or threat, but we were treated very well.

I packed long skirts and scarfs to cover my head and flew to San’a, the capital of the Yemen. The old walled city has been occupied for over 2,500 years and is a world heritage Unesco site. The first morning, I strolled outside to find medieval tower houses rising like sculpted cakes and the decorative window surrounds dripping like white icing. The men – (many of whom strode around hand in hand) wore red and white check turbans, sarongs and swashbuckling jambiyas (ceremonial daggers worn at the waist). The city was bleakly devoid of women and the couple that we eventually came across, were veiled head to foot in black. In the souk we passed a mad man, shackled at the wrists and ankles, shuffling through the juice bars and fruit and vegetable displays with a haunted, wild, expression.

One of the group, a photographer, (who was later to become my husband) beckoned me down some stairs toward the frenzied sound of drumming, into a dark cellar lit by bare, swinging light bulbs. Men squatted on the floor, cheeks bulging with qat, dealing the narcotic leaf, to men who lined up to buy it.

Later that evening, we met Tim Mackintosh Smith, the writer and Arabist, who has lived in the Yemen for more than thirty years, in the summit of a mediaeval tower. He was wearing a long flowing gown, chewing qat and sporting a huge beard. He offered us black tea with cardamom, and we chatted over the haunting backdrop of the Call to Prayer, from one of minarets nearby. He was working on what would become Yemen: Travels in Dictionary Land, which won the Thomas Cook/Daily Telegraph Travel Book Award in 1998.

The following day we set off in a Toyota Landcruiser driven by a man called Hussain. He had weary brown eyes and owned an English/Arabic phrase book, with quaint phrases and illustrations and answered ‘no problem no problem’ to our every request. We were all charmed by him immediately. We were heading for the Hadhramaut, which extends from the coast to the Arabian Sea to the southern deserts. When we reached Ma’rib, 120 miles East of Sana’a, Hussain led us to a restaurant, where tribal men had laid down their AK47 rifles to eat grilled chicken, garlic beans and flat bread. There were no women in the café, although a female beggar sat on the doorstep collecting leftovers. Later that day we visited old Ma’rib, an almost deserted mud town set high on a hill. I wrote in my diary: “dark eerie windows in the baked towers look like the eyes of Antony Gormley sculptures. An unveiled peasant woman dressed in red scavenges among the decaying houses for firewood and a three legged donkey lies exhausted in the road.”

On the third day we embarked on a journey to cross  “the empty quarter”  a desert, covering 250,000 square miles of southern Arabia. Wilfred Thesiger, the legendary explorer of Arabia, described it as 'a bitter, desiccated land that knows nothing of gentleness or ease ... a cruel land that can cast a spell which no temperate clime can match'. We bumped across the dunes, driven by an angry young Bedouin in a white turban and another man who sat cradling his machine gun on his lap. After a long, hot dusty drive we eventually reached the ancient town of Shabwa, built from granite volcanic rock, where the derelict houses are sculpted against a backdrop of black mountains. Later that day, we passed Shibam, a sixteenth century walled town, which guidebooks call ‘the Manhattan of the Desert.” From a distance the medieval mud skyscrapers are truly staggering to behold, magnificent and beautiful. Located at an important caravan halt on the spice and incense route across the Southern Arabian plateau, the city of dwellings up to seven storeys high are developed on a fortified, rectangular grid plan of streets and squares. We left Shibam as long shadows played on the ribbed sand of the dunes.

By day 4 we had reached Tarim, a dusty, desert town where men were playing lazy games of dominoes and chess. There were no ceremonial daggers around their waists and the pace of life seemed gentle. Goats, chicken and donkeys wandered through the souk and unlike Sana’a, not many of the men were chewing qat; it is not grown in the region.

On the long drive to Mukhalla a troop of baboons were squatting on the lunar landscape. We stopped at an ancient mountain village where men were making bricks, and one of our group, Annabel, bought some honey that the Yemenis claimed was an aphrodisiac. The port town of Mukhalla was filthy and pungent and the men wore Westernized jackets. It was nothing like Freya Stark’s description of 1935, “Tall houses every shade of white and grey… a naked crowd with brilliant loincloths and turbans.” We spent a day at the beach, mesmerized by a large school of dolphins.

Back in Sana’a, we were invited to Hussain’s house for lunch, one of the highlights of the trip. We removed our shoes at the front door, and then sat on the carpeted floor lined with hard cushions and bolsters. We were served fenugreek stew and doughy bits of bread dipped in a herby soup with chives, and brought in by a dutiful smiling son. Hussain’s daughters, wife and mother remained firmly out of sight, but we caught glimpses of them when we said goodbye, before Hussan’s wife hastily covered her face.

It was a long, winding drive to Ta’izz, high up in the mountains – a cosmopolitan town with lots of cafes and shops, where many of the women were unveiled. We visited the Ashrafiya Mosque, a white building at the top of the old town built with minimalist-style arches and tall narrow walkways that kept it cool.

Towards the end of our trip we reached Al-Khawkha, once an important coffee exporting port and the biggest fishing village on the southern coast of the Red Sea. In better times it is touted as a tourist resort. We saw beautiful, unveiled women wearing long, patterned dresses, walking freely through sandy palm groves. Walking by the coast, we passed colourful fishing boats and saw flamingoes, sea eagles and sandpipers.

The next day we visited Zabid, one of the oldest towns in the Yemen, and on the Unesco World Heritage List after Shibam and San’a. It was the capital of Yemen from the 13th to the 15th century and a center of the Arab and Muslim world due in large part to its University of Zabid.  In 2000, Zabid was listed on the list of world heritage sites in danger, due to a state of poor upkeep and conservation. Sadly when we visited it was in a state of disrepair.

The last couple of days in the Yemen, we drove back to San’a along the dried up Wadi Sari. We saw weaverbird nests, girls carrying firewood on their heads, and boys selling bananas. The mountain houses were made of coloured patterned stones and the temperature dropped as we reached Thilla, situated above a sloping basin of terraced fields where we ate our last lunch. At the end of a magical journey it was as though we had visited several different countries within one, mediaeval cities, desert towns, coastal resorts, and mountainous regions. It was a deeply romantic and memorable journey, and one that I will never forget.

This  is dedicated to the talented writer and editor, Annabel Freyburg, one of my companions on this trip, who sadly died on the 8th December, 2013.